Pre-Engagement Photos: Rashmika Mandanna and Rakshit Shetty all set for the big day

Rashmika Mandanna is undoubtedly one of the prettiest and most talented young ladies in Kannada cinema today. Merely 21 years of age, she has become the talk of the town thanks to her successful film ‘Kirik Party’. Moreover, the lovely lady has been in the limelight because of her sweet real-life romance with co-star Rakshit Shetty. The two fell in love with each other on the sets of their film and grabbed plenty of attention in the days that followed. Last month, Rashmika wished Rakshit on his birthday and confirmed that the two were all set to take their relationship to the next level. Today, they are all set to get engaged and add a new dimension to their life. Needless to say, this has created quite a buzz amongst fans.

Interestingly, recently, Rashmika had revealed that the engagement would be a high-profile event and would feature several mouth-watering delicacies. She added that it would be an Indo-Western themed party and would be attended a team off six photographers. They would capture the couple’s special moments.

“It is indeed a red letter day of our life and we are determined to leave no stone unturned to preserve those memories,” she added.

Well, we would like to wish the lovebirds the very best for the future. Moreover, we would also like to present before you some pics from Rashmika and Rakshit’s engagement cerememony

So did you like the photos? Tell us in the space below. 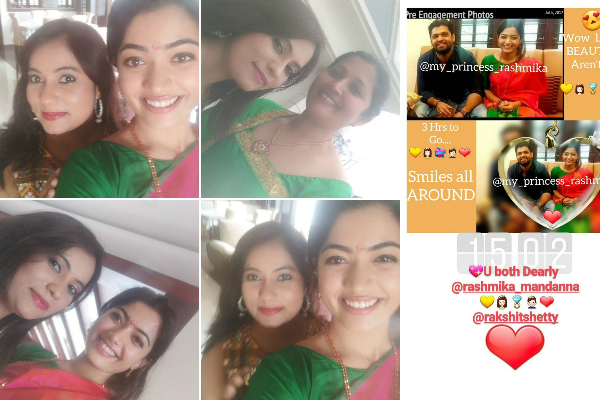