Dulquer Salmaan leaves us stunned in his uber suave look

There’s no denying Dulquer Salmaan looks hot and can make any female go weak on their knees. His style, his charisma has helped him to take place in the hearts of the fans.

Mollywood heartthrob Dulquer Salmaan makes his Bollywood debut with Karwaan. The film also stars the very talented Irrfan Khan and Mithila Palkar in the lead roles. Karwaan released last Friday and received a positive response from the audience and critics alike. There’s no denying Dulquer Salmaan looks hot and can make any female go weak on their knees. His style, his charisma has helped him to take place in the hearts of the fans. Dulquer makes such a dashing appearance during one of the promotional events of Karwaan.

The popular Malayalam actor made a suave style statement. Dulquer wore royal looking blazer by Canali, which he paired with a crisp shirt by Camessi and formal pant. The tie by Hackett London totally stood out. We love how he has kept it simple and formal yet adding a bit of his own style with that pocket square. We are totally crushing on this look. Let us know what do you think of his look in the comments section below. 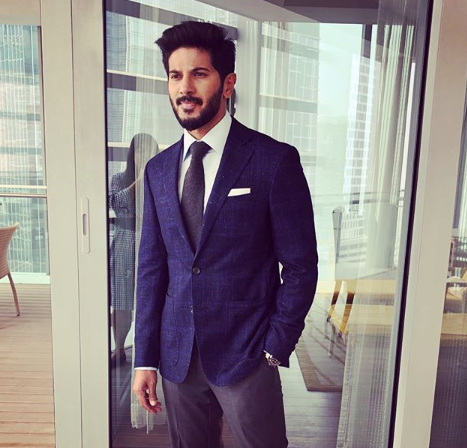 It is a yay all the way to Dulquer Salmaan from us.

Meanwhile, reportedly, Dulquer has signed a film to be directed by debutant B C Noufa. As per media reports, the shooting of the film commenced from July 3 in Kochi. Titled Oru Yamandan Premakatha, the film is written by actors Vishnu Unnikrishnan and Bibin George.

In an interview with Times Of India, Bibin George revealed some interesting details about Dulquer’s role int he film. He said, “Dulquer plays a normal Malayali whom we can identify with, in every street of Kerala. He is naive and good at heart. The character is a far cry from his previous roles such as Faizi from Ustad Hotel or Charlie. It’s not a character that he has done so far.”