The couple hosted a grand reception for their friends and colleagues from the film industries which was attended by many celebrities.

Malayalam actress Bhavana got married to her fiancé Kannada producer Naveen in a low-key affair in Thrissur on Monday, January 22nd, 2018 which was attended by close friends and family members. The couple hosted a grand reception for their friends and colleagues from the film industries which was attended by many celebrities. Manju Warrier, Prithviraj Sukumaran and Mammootty were among many of those who attended the wedding reception hosted at a plush hotel. Actress Remya Nambeesan has been alongside Bhavana throughout the wedding right from the mehndi till the reception. Bhavana has acted alongside Prithviraj Sukumaran in the recent release Adam Joan while she appeared alongside Mammootty in films like Bus Conductor. Here are few photos from the wedding reception of Bhavana: 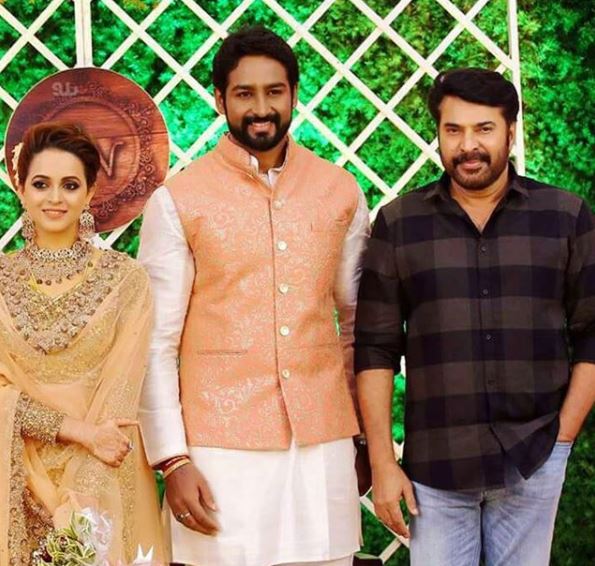 #Prithviraj and wife #supriya with #bhavana and #naveen at reception.

Bhavana got engaged early this year to Kannada producer Naveen in a simple ceremony which was attended by close friends and family members. Bhavana has been receiving congratulatory wishes from all around the world but one message might be a very special one for the South Indian actress. Bollywood lady ‘superstar’ Priyanka Chopra wished Bhavana on her wedding in a video message and it is quite adorable. In a minute and a half video, Priyanka Chopra wished Bhavana on her wedding and wished her good luck for the new journey. “I just wanted to wish you a very happy married life. This is going to be a big step in your journey and I just want to say good luck. You’re an extremely feisty, brave and amazing woman and I admire you a lot. Much love and always,” Priyanka wished in the video message for Bhavana.