Bigg Boss Tamil serves as a nice platform for Kamal Haasan to express his views on political issues.

Much before reality TV became a staple for the Tamil audience, there was a time when Tamil television’s market leader, Sun TV aired programs that included soaps, the daily news and the famous ‘Pepsi’ ungal choice.  As the years went by, the audience who were fed on limited television content during the 90s’, transitioned themselves into a different league. They were fed on film clippings, game shows, latest film releases – making them spoilt for choices. Television channel Star Vijay too played a key role in bringing diverse programs to the Tamil audience.  This year, they’ve brought Bigg Boss to their viewers.

One of the most popular conversations at any social gatherings amongst Tamilians these days is ‘did you watch yesterday’s episode of Big Boss?’ and ‘I just hate that girl on the show, she’s so fake’. These conversations only prove how this show is taking over our daily lives.

For the uninitiated, Big Boss is based on Big Brother which was created by Endemol, a Dutch media company. While the Hindi version of Bigg Boss is almost a decade old, the Tamil version premiered in July 2017. When the promos of the show were first released, fans of the successful Hindi version were uncertain about the show’s success. Hosted by Salman Khan in Hindi, every new season of the show has something new about it. It’s filled with drama where housemates displaying their aggression, they fall in love and even getting married on the show – replicating a sort of a movie format on the small screen.  These doubts were put to rest after the first few episodes of the show. The unprecedented popularity of the show helped Star Vijay gain TRP numbers. According to BARC Star Vijay is second only to market leader Sun TV, based on the weekly impressions.

When it comes to hosting reality shows, Star Vijay has been a frontrunner of sorts. In 2012, Star Vijay added a special spark to the channel by premiering Neengalum Vellalam Oru Kodi (format adopted from Kaun Banega Crorepati) and introducing actors such as Suriya, Prakash Raj and Aravind Swami to the small screen. These actors charmed their way into the hearts of the Tamil audience.

If these top league actors gave the channel an added value, then it’s a whole new experience to watch a superstar enthrall the audience with his terrific hosting skills on Bigg Boss. The actor who has helped the channel upgrade to the next level is Superstar Kamal Haasan. Getting a multifaceted actor such a Mr. Haasan on board to host the show is quite something. The actor has so far voiced his views on politics, life, and everything thought-provoking only in his films. This time around, he has adopted the Bigg Boss platform to speak about all this, including dropping hints about foraying into politics.

His appearance is restricted to only to two days a week, and on those days he connects with the participants through a big screen. Those episodes he appears in go on to be the best. So what magic does Kamal Haasan add to transform this drama-filled show into an exceptional viewing experience? It is undoubtedly his ability make the audience question the status quo – without imposing his judgment on to the viewers.

His unconventional style of asking the participants to self-analyze their behavior, his wit, his directness to identify between right and wrong and the empathy he displays towards each participant serve as proof of why Kamal Haasan is unarguably the best host this show can get. Despite the irrational and irate attitude the participants express towards each other in this competitive game, Kamal Haasan often reminds them that the ‘game’ will eventually end, and the reality will strike them once they are out of the house. The Padma Bhushan winner’s chat sessions and the ability to be ‘voice of the people’ win him whistles and cheers galore from the live audience and viewers alike.

One of the episodes required the participants of the house to mimic the inmates of an asylum. After this episode, the show received a lot of flak as it came across as insensitive to the mentally challenged. Soon, Kamal Haasan expressed to his viewers that he is not a part of planning tasks for the contestants, however, he did feel the need to make an apology for the same.

It’s a mighty effort for a man of his stature to give an unbiased view and apologize on national television for something he wasn’t a part of. His honest and unscripted rapport with the audience has added a fresh flavor to reality TV and is effectively helping the show gain immense popularity.

Indian cinema celebrates and worships its leading men, however, the place where the leading ladies gain phenomenal recognition, are daily soaps. However, television soaps often categorise the leading lady of the show trapped in a vicious cycle. It’s either to battle against her mother in-law or her extended family. Other times, these women simply take the supernatural route by turning into snakes and haunting those who avenged them.

That’s where reality television stands apart. Bigg Boss features real people who are put in an environment away from the phones, television and any contact to the outside world – all unscripted. The contestants bring out their best and worst qualities on the show – thanks to the tasks assigned by Bigg Boss and their ability to cope with strangers inside the house. One such participant went on to become a celebrated personality, winning national media attention. The actress who gained immense popularity is  Oviya. The Tamil audience barely had an impression of Oviya as she was only a few films old, but what made Oviya shine was her ability to stand up to fellow contestants and speak up with when was bullied. 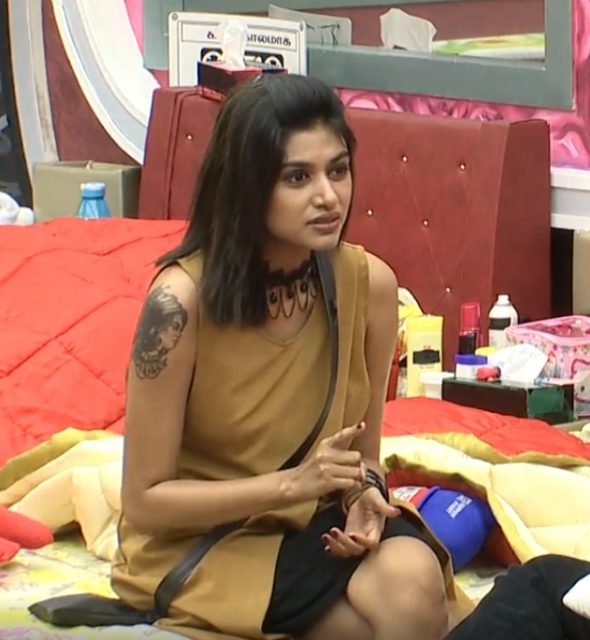 The audience adored the way she respectfully said to another contestant ‘’Neenga Shut Up Panunga” (neenga or you is only used to address elders), which became so popular that it a song was created with this catchphrase. The actress took on new challenges with full gusto. However, the Bigg Boss house was becoming a hostile environment to her.

The audience saw an aggravated, angry and confused Oviya. This was only until she had a breakdown of sorts and confessed to Bigg Boss that she would like to exit the show. It was new for the audience to see a woman confess that she valued herself over anything else and didn’t hesitate to declare it on national television. When was the last time you saw someone this honest on a Tamil show?  The game show won her immense popularity even after she exited. It has to be noted that actress Shilpa Shetty’s participation in the UK version, Celebrity Big Brother also won her unprecedented popularity when she was subjected to racism and bullying in the house.

At any given time on any popular Tamil channel, there is at least one soap aired. Since most Indians live with their extended families, the only preferred show watched during the prime time slot would be a soap, however, this is soon taking a shift as many opt to watch a reality show like Bigg Boss, they even take their smart phone to watch it online.

The program is also about interaction as the public decides as to who stays on the show and who needs to be evicted. One of the main reasons that audience enjoy watching Bigg Boss is because of their ability to view the program for their pseudo pleasure which gives them some gratification. Now with just less than a month for the show to end, the team behind Bigg Boss, is challenging participants to complete strenuous tasks to reach to the finale. The pressure is higher among participants as well as among the audience to see whose survival instinct helps them win the title.

Love it or hate it, you simply can’t deny the fact that Bigg Boss has taken over our homes and is gradually helping us fully welcome reality shows.