Aadai first look: Amala Paul in a bruised and battered avatar will leave you stunned

The role that Amala Paul will be essaying in the film demands lots of physical and mental strength.

The high-time season of many actresses striding on the pursuit of female-centric tales keeps flowing into long queues. But Amala Paul’s Aadai is a substantial one that can be regarded as something uncalled for. Filmmaker Rathnakumar, who shot to fame for his commercially successful and critically acclaimed ‘Meyaadha Maan’, has come up with a tale that will throw up an intense jaw-dropping experience for the audiences. In common, the female bounded tales would be confined to the supernatural thriller or feminist based boundaries. But this one gets beyond such prototyped constituents with a groundbreaking theme.

The role that Amala Paul will be essaying in the film demands lots of physical and mental strength. Nonetheless, the actress made a firm decision to be a part of this project with sure-footed confidence that this role will be a game-changer in her career. In the first look, Amala is seen crying out loud in a bruised avatar. The impact of the first look is quite strong and it only makes us wait for the film. Take a look below:- 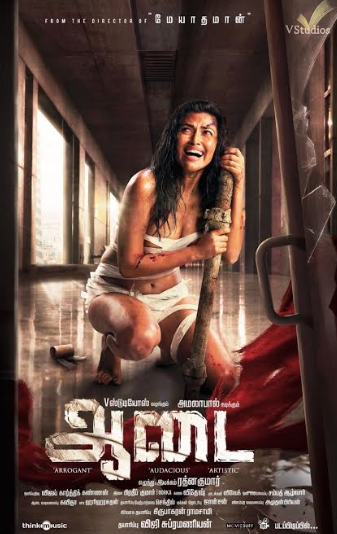 Working for Adai, actress Amala Paul says, “Aadai isn’t a regular script and projects like this is what fuels the quest of an artist to deep dive in them and bring out layers of human emotions. The intricacies of my character ‘Kaamini’ is already giving me jitters and especially to everyone else around me. After watching Rathna Kumar’s ‘Meyaadha Maan’, my confidence spurred up with his capabilities of weaving story lines in an engaging narrative.”