It is no secret that the eagerly-awaited ‘Vivegam’ has created quite a buzz amongst fans as it features Ajith Kumar in a brand new avatar. Moreover, it has grabbed eyeballs courtesy its intriguing teaser. Now, it seems that the buzz surrounding the film is all set to reach new heights. In an exciting development, a still from ‘Vivegam’ is going viral and that too for all the right reasons. 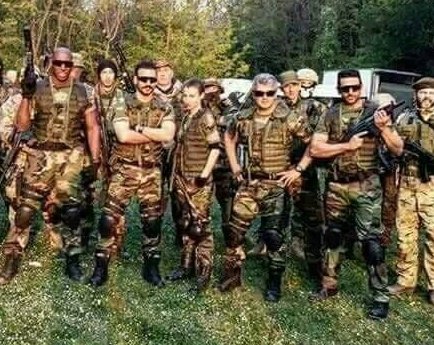 In the still, ‘Thala’ can be seen alongside his onscreen nemesis Vivek Oberoi. Interestingly, both actors can be seen sporting similar gear. And, needless to say, this makes us eager to know more about the plot of this spy-thriller. Besides this, it raises a few questions about Vivek’s character in the film.

On a related note, ‘Vivegam’ is being directed by Siva and is slated to hit screens next month. Besides Ajith-Vivek, it features Kajal Aggarwal and Akshara Haasan in the lead. This will be the first Tamil film of Akshara’s career.

In case you did not know, she made her big screen debut with the Dhanush-Amitabh Bachchan starrer ‘Shamitabh’. Thereafter, she acted in ‘Laali Shaadi Mein Laadddoo Deewana’ which hit screens earlier this year. Let us hope, her maiden Tamil film fares well at the ticket window.

As far as Ajith is concerned, ‘Vivegam’ will be his first release in nearly two years. He was last seen in ‘Vedalam’ which fared well at the box office. Besides the superstar, it also featured Shruti Haasan in the lead.