Rajinikanth and Akshay Kumar starrer 2.0 is creating huge excitement among the moviegoers ahead of its release.

Rajinikanth and Akshay Kumar starrer 2.0 is creating huge excitement among the moviegoers ahead of its release. The film is just two days away from the release and is already breaking records. As earlier we revealed, 2.0, which has been directed by Shankar, has already earned over Rs 120 crores approx at the advance booking stage. The sci-fi film also starring Amy Jackson is not only witnessing fabulous response down South but also in Mumbai. With Indian cinema’s biggest icons Akki and Rajinikanth in the film together, 2.0 is set to create wonders at the box office. Also, the advance booking is breaking records even in Pakistan as soon as advance booking started.

According to reports, the Central Board of Film Certification (CBFC) has cleared 2.0 for release in Pakistan. The film will be screened in around 75 cinema theatres across Pakistan, and the English newspaper there also featured 2.0 in its advertisement section announcing the start of the advance bookings. 2.0, also starring Amy Jackson, is witnessing massive advance booking in Pakistan. Meanwhile, the advance booking for the film has received fabulous response with around 75 percent of the film’s shows in Chennai are already filling fast. Some shows in Telugu are already sold out. Even in Bengaluru, Kochi, and Hyderabad, 2.0 is witnessing a great response. 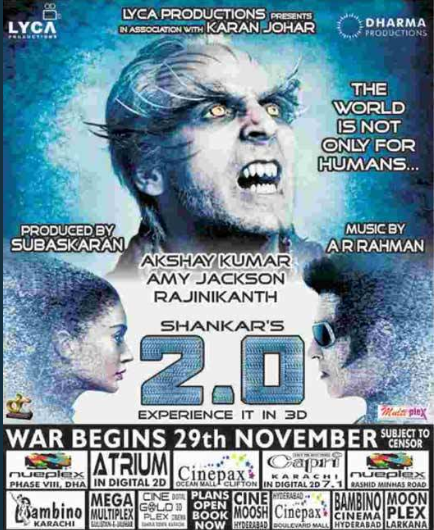 In the film, Rajinikanth plays a scientist and a robot. 2.0 is the sequel to the 2010 blockbuster Enthiran (Robot) which also featured Aishwarya Rai Bachchan. Lyca Productions produced 2.0 starring Rajinikanth and Akshay Kumar in the lead. The film marks Akshay Kumar’s Tamil debut. Amy Jackson is the female lead in this Shankar-directorial movie.