Birthday Special: These photos of Vijay are simply awesome

Today on the occasion of Vijay’s birthday, we present before you some of his best personal photos.

There can be no denying that Vijay is one of the biggest and most celebrated actors in Tamil cinema today. During his illustrious and eventful career, the star has proved that he is a synonym for success and delivered several hit movies along the way. Moreover, ‘Thalapathy’ has impressed fans and casual viewers alike courtesy his raw look, simple personality and of course impressive onscreen avatars. Today, as Vijay turns a year older, let us take a quick look at his personal and professional life

Vijay was born in 1974 in Chennai to director SA Chandrasekhar and singer Shobha. After appearing as a child artiste in films such as ‘Vetri’, he made his big screen debut with the 1992 release ‘Naalaiyaa Theerpu’. Touted to be an action-drama, it flopped at the box office. However, Vijay soon bounced back and tasted success with ‘Sendhoorapandi’ and ‘Rasigan’. Thereafter, he went on to establish himself as a dependable/bankable performer. In 1999, he tied the knot with London-based Sangeetha Sornalingam and added a new dimension to his life. The two were blessed with a son in 200o. They named him Sanjay. In 2005, they became parents again and were blessed with a daughter.

Interestingly, in 2009, Vijay started a social welfare organisation. This organisation carried out philanthropic activities post Cyclone Thane. So, he clearly is someone who believes in using his position to bringf about a change.

These days, Vijay has become the talk of the town because of his film ‘Mersal’. Its first look was released yesterday and created quite a buzz on the social media. In it, he will be seen alongside Samantha Ruth Prabhu and Kajal Aggarwal.

We wish Vijay a happy birthday and hope that he continues to entertain fans for many more days to come. 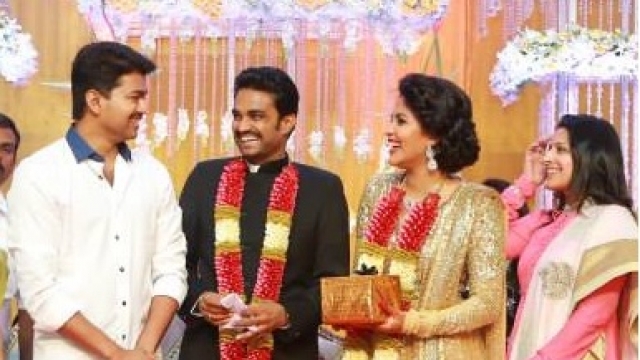