Dhanush to make a huge announcement on Hansika Motwani’s birthday

The announcement will be made by none other than Dhanush on Hansika Motwani's birthday.

The bubbly actress Hansika Motwani enjoys a strong fan following down South. The gorgeous is one of the reigning queens of the South Indian industry, courtesy her performance and stunning looks. Now, we have got some interesting news for Hansika Motwani fans. There’s exciting news in the store for everyone. Hansika is all set to announce the title of her upcoming 50th film on her birthday. Yes, and the announcement will be made by none other than Dhanush. Hansika’s birthday falls on August 9 and this is surely going to be a special day not only for the actress but also for her die-hard fans who can’t wait to catch their favourite star on the silver screen.

Hansika took to Twitter and made an announcement about the same. She wrote, “A surprise for all my fans , my 50th films title is going to be announced on my birthday 9th of August watch out for the space 😊 #hansika50th.”

A surprise for all my fans , my 50th films title is going to be announced on my birthday 9th of August watch out for the space 😊 #hansika50th 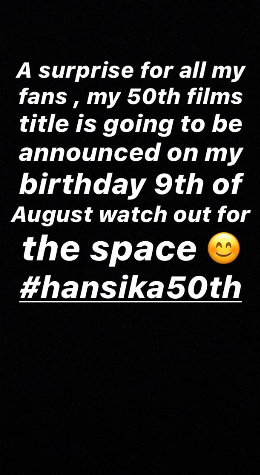 Meanwhile, last month, in an interview with Deccan Chronicle, Hansika spoke about her sabbatical and what kinds of roles she wants to do now. “I was getting a lot of offers, but I was no longer interested in playing a cute, bubbly girl running around trees. I felt the need for a change, the need for growth. So I waited for the right offers and chose Thuppakki Munai with Vikram Prabhu and 100 with Atharvaa. In both these films, I have strong, impactful roles. I also play a complex character in Jameel’s untitled suspense thriller,” Hansika was quoted as saying.

Hansika Motwani has a couple of films in kitty including untitled film alongside Atharvaa Murli. She has also signed her next with debutant director UR Jameel.