Home » Tamil » News » DMK leader M Karunanidhi passes away at 94; Rajinikanth and other celebs mourn the loss of a great leader

DMK leader M Karunanidhi passes away at 94; Rajinikanth and other celebs mourn the loss of a great leader

From superstar Rajinikanth to R Madhavan, Siddharth, Kichcha Sudeepa and many others paid tribute to Karunanidhi.

In a shocking news coming in, Dravida Munnetra Kazhagam (DMK) chief M Karunanidhi passed away today at 6:10 PM, in Chennai. He was 94 and was extremely critical and unstable from the past few days. Karunanidhi was admitted Kauvery Hospital in Chennai on July 28, 2018, after his blood pressure dropped. A press release was issued a while back which read as, “With deep anguish, we announce the demise of our beloved Kalaignar Dr M Karunanidhi on 07.08.2018 at 06 10 PM. Despite the best possible efforts by our team of doctors and nurses to resuscitate him, he failed to respond.” The statement further read, “We profoundly mourn the loss of one of the tallest leaders of India and we share the grief of family members and fellow Tamilians worldwide.”

Before entering the world of politics, Karunanidhi made a huge contribution in the Tamil film industry. He was a screenwriter and has written for several blockbuster Tamil films which are remembered even now. In the year 1969, Karunanidhi became the Chief Minister of Tamil Nadu. 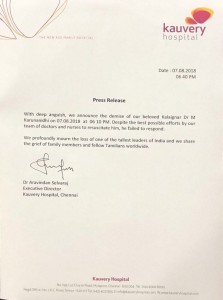 Many South Indian celebrities took to Twitter to pay last respect to the great leader. From superstar Rajinikanth to R Madhavan, Siddharth, Kichcha Sudeepa and many others paid tribute to Karunanidhi.

Saddened hearing the demise of one of this Nations Most dynamic leader and writer. May his soul Rest In Peace. Condolences to the entire party,family and supporters. pic.twitter.com/8cayC1tCAD

Deeply Saddened to hear about the fall of such a great leader, who fought every battle till the very End. May his soul rest in Peace and all strength to his family. 🌅 #RIPkalaingar pic.twitter.com/5dUATOQ7o4

The Last #Tamil Titan has fallen. Former TN CM #MKarunanidhi was an incomparable man. #TamilNadu has lost at once its greatest contemporary political and creative enigma. Our beautiful language #Tamil will miss #Kalaignar #Karunanidhi This void he has left will take ages to fill.

The country will always remember this Amazing personality and Leader ,,,Kalaignar Karunanidhi ji for his huge contribution to Tamil Nadu.
RIP sir.

My condolences to his admirers, supporters and his family .. #RIPKalaignar

Grandad’s oldest friend, his best man at his wedding, a part of the family even before the brand Sivaji came in to the industry & a well wisher of all things related to Annai illam . We will miss you Aiyah 😔🙏#கலைஞர் 🙏 #Legend 🙏 pic.twitter.com/0VNri6vi1m

The end of greatness 🙏🏼🙏🏼🙏🏼🙏🏼Pride of Tamilnadu! My heartfelt condolences to the entire family. RIP Ayya #KalaignarKarunanidhi pic.twitter.com/gyCuCsvS3l

A beloved Leader, @kalaignar89
A Legend who ruled politics and Art!
RIP Sir 🙏🙏
Heartfelt condolences to his family and many, many followers… pic.twitter.com/XEATvJjWeP

Sri. Karunanidhi, the one man who defied all odds! Praying the almighty to give strength to his family and my Tamil brothers and sisters. Irreplaceable loss.

An era of politics , an era of leadership an era of writing … #Kalaignar #karunanidhi #ripkalaignar #ripkarunanithi pic.twitter.com/7HNYrFEFet

A true legend, a leader of masses and always lead by example, Sri. Karunanidhi leaves a huge void. My condolences to Brothers Stalin and Alagiri and their families. He touched millions of lives with his policies, gave hope to millions and inspired millions with his writing.