2017’s biggest entertainer Mersal, starring Vijay SJ Suryah, Samantha and Kajal Aggarwal in the lead roles has added another achievement to the winning list. Mersal has added one more feather to its cap long after the release of the film. Thalapathy Vijay has bagged Best International Actor Award for Mersal by International Achievement Recognitions Awards (IARA). The fans of the actor have already started showering congratulatory wishes on social media. 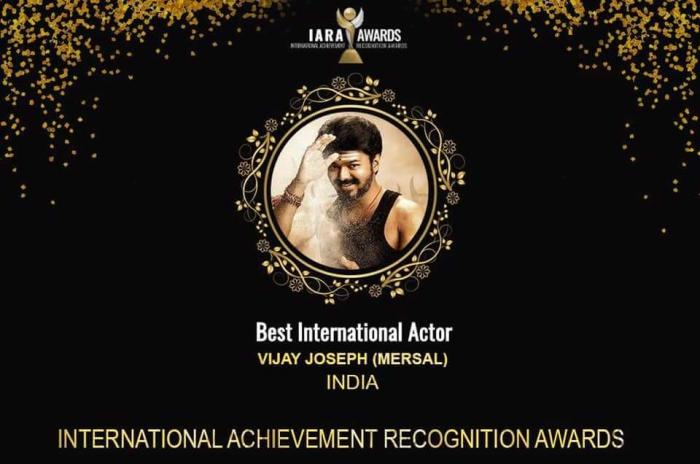 Earlier, the blockbuster film of 2017 that went on to earn Rs 200 crore at the Box Office, became the first Tamil film to release in China. Mersal had joined the list of Indian films like Baahubali and Dangal that have released in China.

Directed by Atlee, Mersal told the tale of a man who decides to solve a healthcare threat and in the process discovers the reason behind his father’s death. The film starred Vijay, Kajal Aggarwal, Samantha, Vadivelu and S. J. Suryah in lead roles. After the release of the film, it caught itself in a controversy when it featured dialogues criticising GST and demonetization. Despite this, the film went on perform extremely well at the box office and even gained appreciation from Rajinikanth and Kamal Haasan

Directed by Atlee the film was produced by N Ramasamy, Hema Rukmani, R Mahendran and H Murali under the banner Thenandal Studio Limited. AR Rahman composed music for the film.