Home » Tamil » News » Mohanlal joins Suriya in London for their next!

Mohanlal joins Suriya in London for their next!

South superstar Suriya has geared up for his next ‘Suriya 37’ and the shooting of the film has begun in London. Suriya along with Bollywood actor Boman Irani, actor Arya and others is currently shooting for the film in London. Now, another superstar has joined the team there. Yes, we are talking about Mohanlal, who has commenced with the shoot for Suriya’s next. The audience was quite enthralled on knowing that Mohanlal and Suriya will be seen together in the film. Reportedly, Malayalam superstar Mohanlal will be playing a role of a politician.

Check out Mohanlal and Suriya’s photo from the sets here:- 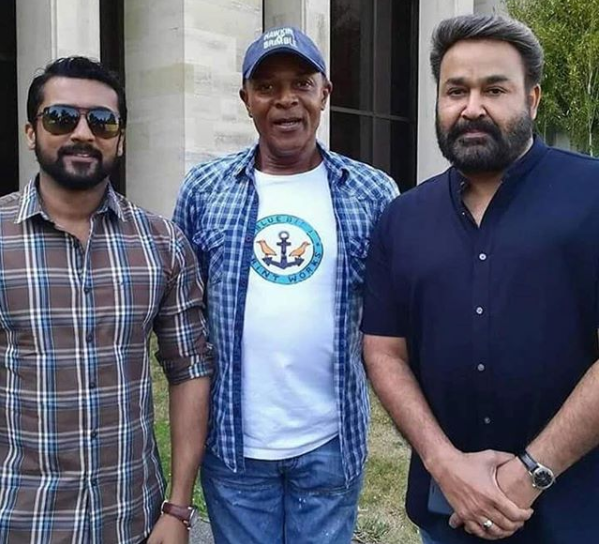 The shooting for the London schedule will go on for a month. Suriya will be seen portraying different looks in the film. Produced by 2.0 makers Lyca Productions, Suriya 37 is touted to be a project being made on a whopping budget. The shooting will take in various locations of New York, Brazil, England, Hyderabad and New Delhi.

Malayalam superstar Mohanlal, who is quite busy with his upcoming film, will play a very important role in the film. Suriya 37 marks Mohanlal’s return to Tamil cinema four years after the 2014 Vijay-starrer Jilla. The film will also feature actress Sayyeshaa.

Suriya’s next release would be NGK, his upcoming film with Selvaraghavan, which will have him play a character which he hasn’t tried before in his career. –

Post ‘Suriya 37’, the actor also has plans to do ‘Suriya 38’ and ‘Suriya 39′ with ’24’ fame Vikram Kumar and Hari respectively. The actor recently confirmed about his upcoming films at a recent fan meet. –