Directed by AL Vijay, the shooting of the film was recently wrapped up and is gearing up for a summer release this year.

Actor, choreographer and filmmaker Prabhu Deva will next be seen in a film titled ‘Lakshmi’ that will also feature the talented Aishwarya Rajesh. Directed by AL Vijay, the shooting of the film was recently wrapped up and is gearing up for a summer release this year. The producers of the film gifted Prabhu Deva something special on the last day of the shoot which made the actor quite emotional. Producers Prateek Chakravorty and Shruthi Nallappa of Pramod Films gifted Prabhu Deva, a beautiful painting portrait to bid adieu making it more special for him. “Lakshmi has more emphasis laid upon emotional factors and in relevance our farewell had more such influences. Prabhu Deva sir has been a great support throughout the shooting and his involvement more personal as the story revolves around dancing,” said producer Prateek Chakravorty in an official statement. 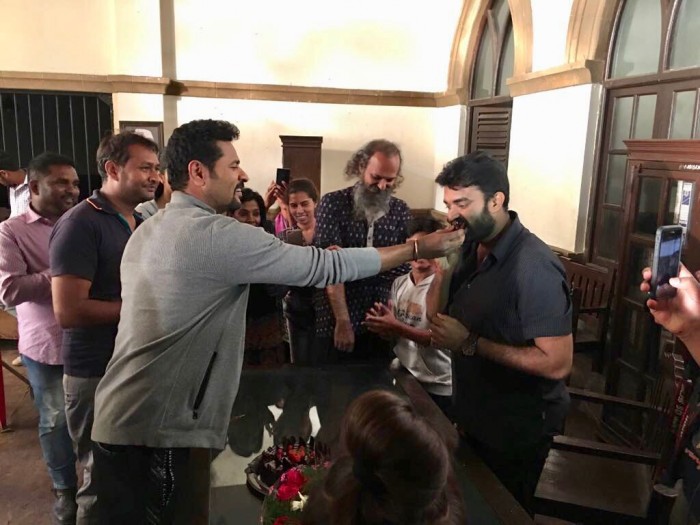 On her part, producer Shruthi Nallappa says, “Director Vijay sir has always been ennobled as a producer friendly person. His ideas, perfect planning and executing them proficiently have been a delight to producers. More than just hearing them, we personally experienced it during ‘Lakshmi’.” ‘Lakshmi‘ boasts of highly talented actors like Prabhu Deva and Aishwarya Rajesh. With musical score by latest sensational icon – Sam CS and cinematography by magician of visuals – Nirav Shah, Lakshmi is also jointly produced by Trident Arts Ravi this film will definitely offer its toast of amusement to audiences.

Prabhu Deva was last seen in ‘Gulebakavali‘ which was written and directed by Kalyaan, and also featured Hansika Motwani in the other lead role. The film had a grand opening but started to fade out over the next few days. Competing with big-ticket films like Suriya’s ‘Thaana Serndha Koottam‘ and Vikram’s ‘Sketch‘, one felt that it probably was not the right period to release the film. Borrowing the title from the 1955 classic, ‘Gulebakavali‘ is set to be a dark comedy featuring Prabhudeva and Hansika in never-seen-before roles. The director of the film, Kalyaan S had said that this film will boast of some spectacular special effects. It is also said that the makers are taking a lot of effort to perfect the special effects and costumes of the film so that the audience enjoys watching quality cinema. Besides Prabhudheva and Hansika Motwani, ‘Gulebaghavali’ also stars Revathy, Yogi Babu, Anandraj, Mottai Rajendran and Muniskanth.