Rakul Preet shines bright in ‘Jade’ for a family wedding

The gorgeous Rakul Preet recently attended a wedding and looked all things beautiful.

The supremely pretty looking Rakul Preet Singh is arguably one of the most popular and sought after actresses in Southern cinema today. A skilled performer, she has over the years found firm footing in the industry and won the support of movie buffs along the way. Moreover, she has worked with stars like Ravi Teja and proved that she is here to stay. 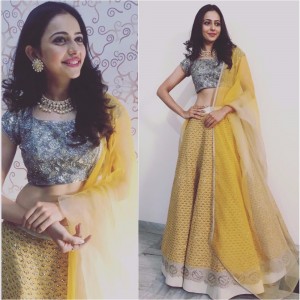 The gorgeous Rakul Preet recently attended a wedding and looked all things beautiful. Rakul Preet shined bright as a sunshine in a yellow ensemble from Jade. The outfit was a gorgeous combination of grey and mustard yellow. The blouse was made of heavy grey sequins with cuff sleeves. The lehenga was a in mustard yellow with grey embroidery and a thick off-white border. We love how she has kept it simple with a kundan and pearl choker and complimenting huge studs from Manjula Jewellers. The talented  actress was styled by Neeraja Kona. She opted for minimal makeup with pink lips, heavy kohled eyes and open beach wavy hair rounded off her stunning look.

Rakul Preet’s recent release Theeran Adhigaaram Ondru (Khakee in Telugu) was a big hit and impressed both the Tamil and Telugu audiences. When she was asked if she had taken any formal training for her role, she said, he revealed that she didn’t have much to work since she already knows how a police life would be since her father was in the army.

She recalled an incident where she spent four days in the bunker with her father. She was nostalgic about those days which are carved in her mind.

Tamil film Theeran Adhigaaram Ondru opposite actor Karthi was a huge hit with the music company Aditya launching into the film industry with this film. Aditya Music’s Umesh Gupta and Subhash Gupta inspired by the film’s content bought the Telugu rights. In case you did not know, Theeran Adhigaaram Ondru is touted to be an action-thriller and was directed by H Vinoth. Its supporting cast included names like Bose Venkat and Abhimanyu Singh.

Interestingly, sometime ago, Rakul had tried her hand at riding a cycle rickshaw while shooting for the film in Pondicherry and enjoyed the experience a lot. Talking about it, she had said that it was a ‘fun experience’ for her. “The rickshaw driver was really nervous about me riding his rickshaw . He came to me atleast five times to show me where the break was as it was not a regular break. He just wanted to be sure that I don’t ram into something. It was a fun experience.  I not only enjoyed peddling the cycle rickshaw around with Karthi and rickshaw driver sitting at the back but also had  great work out on set,” she had added.

In Bollywood, after Yaariyaan, Rakul Preet will next be seen in Aiyaary. Talking about it, a source revealed to a tabloid, “Rakul Preet plays an IT professional, who is Sidharth’s love interest in the film, which is based on real-life events while Sidharth plays an army officer. After a brief break following the Kashmir schedule, the team will resume filming in Delhi.”

The official Twitter page of Aiyaary confirmed the news by saying, “3rd Character in the #TeamAiyaary along with #Sid & #Manoj

@Rakulpreet plays an IT pro!

Aiyaary is based on a real-life incident revolving around two strong-minded army officers having contrary views yet right in their own ways. Manoj Bajpayee plays the mentor of protégé Sidharth Malhotra in the film.

Talking about the Kashmir schedule of Aiyaary, a source stated to a leading daily, “It was humbling to witness the difficult conditions in which the jawans lived and the constant danger they faced. For the jawans too, interacting with Sid and Manoj and posing for pictures with them was a wonderful experience.”

The actress also opened about her personal life recently, she said, In a recent interview, the actress made some sweet comments about her wedding. “We don’t know what happens in our life. Anything can happen anytime. We are not sure of how and what happens. My wedding might also happen anytime. I may marry a Telugu guy.” revealed Rakul Preet resulting in a talk that she will marry a Telugu hero like that of Samantha.