The actress recently met Salman Khan in Toronto where the actor was for his much-talked-about Da-bang tour.

Take a look at the picture: 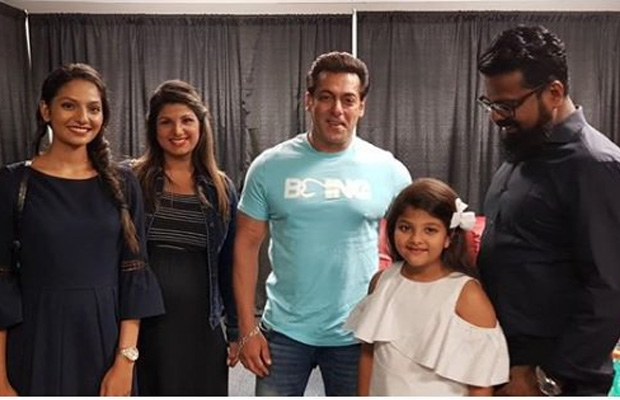 Rambha is currently away from the acting. The actress is pregnant with her third child. The gorgeous mommy-to-be actress took to social media to share the news with her fans. The 39-year old is already a proud mother of Laanya, (born in January 2011), and Sasha (born in March 2015). She delivered both the babies in Toronto.

Flaunting her baby bump, Rambhas shared a picture along with an adorable message. The actress herself announced the news on her Facebook account and wrote,“On this very happy moment. I wish to share my happy news to all my loved ones around the world that I am pregnant with our baby number 3. showing off my pregnancy ðŸ¤° baby bump picture proudly:))I cannot express my bundles of joy. please pray for me and my family”.

Rambha tied the knot with Canada-based businessman Indran Pathmanathan in 2010. Post marriage, she shifted to Toronto with her husband and has been away from acting since then.

Actress Rambha, who gained some popularity in Bollywood from doing movies like Judwaa opposite Salman Khan, has majorly worked and established herself down south with Tamil, Telugu, Kanada and Malayalam movies.

Rambha shot to fame with her movie Ullathai Allitha (1996) in Tamil, was a popular face in the 1990s and 2000s and is mainly remembered for her glamorous roles. Her last film outing was Malayalam film “The Filmstaar” in 2011 with Dileep.