With sequels quite in the trend, the fans of Rehnaa Hai Terre Dil Mein film are eagerly waiting for the second part, popularly known as 'RHTDM'.

Dia Mirza as we all know made her acting debut with Rehnaa Hai Terre Dil Mein (2001) opposite R Madhavan. Their camaraderie onscreen was an instant hit and was immensely loved by their fans. Not just onscreen, the two even share a great friendship in real life and this only makes us want to see them together on the big screen again. With sequels quite in the trend, the fans of Rehnaa Hai Terre Dil Mein film are eagerly waiting for the second part, popularly known as ‘RHTDM’.

Recently, one of the fans of Dia Mirza asked the actress if RHTDM is in making or if the actress is up for another film with Maddy. Reacting to the same, Dia replied saying that even she along with R Madhavan is waiting for this to be answered. Well, the former Miss Asia Pacific only hints that they are currently in talks for the film’s sequel. We are excited! How about you? Let us know in the comments section below. 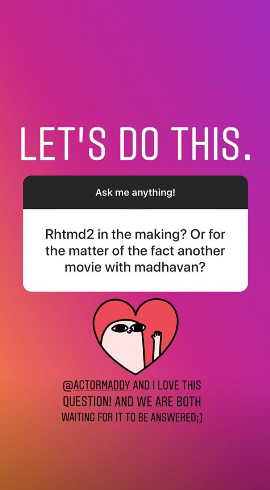 Directed by directed by Gautham Menon, Rehnaa Hai Terre Dil Mein featured Madhavan, Diya Mirza and Saif Ali Khan in the lead roles. A remake of the popular Tamil film Minnale, the film developed a cult among the youth.

On the work front, Madhavan will also be seen in a Telugu film titled Savyasachi alongside Akkineni Naga Chaitanya which is being directed by Chandoo Mondeti. Savyasachi will be Madhavan’s first straight Telugu film with a longer screen time even though he did make an appearance in Om Shanti back in 2010 as a Radio Jockey. Also, much to the joy of fans, Tamannaah Bhatia would be seen shaking a leg for a special number in Savyasachi which has music by M.M.Keeravani.

Meanwhile, Maddy will also team up with Shraddha Srinath for a romantic story which will be directed by debutante Dhilip Kumar. Dhilip shot to fame with the short film Kalki which garnered a lot of attention from Tamil audiences.