Thala Ajith and Shalini’s adorable son Aadvik is celebrating his third birthday today. Aadvik, fondly referred to as Kutty Thala has a huge fan following and has received many heartwarming wishes on Twitter today.

Many fans from across the globe have wished Aadvik on his birthday. A picture from his birthday celebrations is going viral on the internet and Aadvik is looking extremely cute in the photo.

Check out the photos: 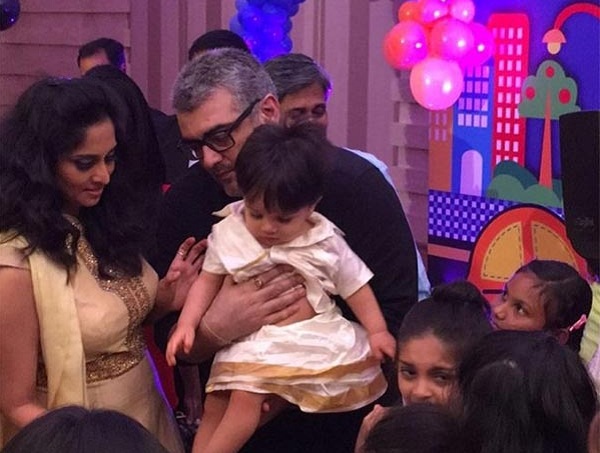 Meanwhile, Ajith and Shalini fell in love on the sets of ‘Amarkalam’. After a brief courtship, they married in 2000. After marriage, Shalini, who has featured in such hit films as ‘Alaipayuthey’, quit acting and decided to be a full-time homemaker. She does, however, pursue her passion for badminton.

On the work front, Ajith will be next seen in Viswasam, which marks director Siva’s fourth successive association with Ajith after Veeram, Vedalam and Vivegam. As per reports, Nayanthara has been roped in to play the heroine opposite Ajith in the film.

Nayan and Ajith have previously worked together in films such as Billa and Arrambam to name a few. Their chemistry was loved by the audience.

Talking about the film, Siva had said that it will belong to a completely different genre and offer something new to the viewers.

Talking about Ajith, Siva had said, “While working on a film, I don’t really get worked up, thinking about people’s reaction. I give my 100% to the movie. I am truthful to what I do. Hence, I think hard work pays. Moreover, I am a strong believer and am sure that God blesses those who work hard. I think the results come naturally.’’