Ajith Kumar stuns as an Interpol agent in the trailer of his Tamil film Vivegam. 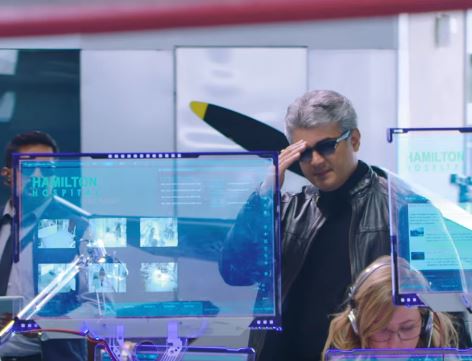 Thala Ajith Kumar’s Tamil flick Vivegam is already making all the right noises. We saw the first look poster of the much awaited movie on the occasion of actor’s 46th birthday. It was intriguing enough and got us all hooked to the movie. The trailer on the other hand, pays a tribute to 25 years of Ajith.

The makers have released the trailer of the movie, which looks all the more interesting. The film, which has been shot extensively in Serbia, is directed by Siva of Vedalam and Veeram fame. The movie is a crime action thriller based on the urban terror attack in Europe. As per the buzz, Ajith Kumar is playing the role of an Interpol agent in the film while Vivek Oberoi is seen in the role of a baddie.

The trailer shows us some breathtaking visuals of Bulgaria as they introduce Ajith, the Interpol agent working in the Counter Terrorist Squad.  The trailer has some great shots of Ajith, as he sets out on his mission. The tagline for the title reads – ”Believe in Yourself”. The trailer all in all, is grand, inspirational and depits Ajith’s heroic role. There is also a glimpse of Ajith and Kajal’s romantic angle and their chemistry sure is crackling.

Kajal Agarwal and Akshara Hassan play the female leads in the movie, which is set to release this month. Vivek Oberoi can be seen in his bad guy avatar and he sure sounds chilling. The trailer ends with Ajith saying, “You will see my rage.”

Are you looking forward to catch Thala Ajith Kumar in action? It sure looks like a must watch for Ajith fans.