Hansika Motwani wore a sky blue pantsuit by Massimo Dutti for a recent event in Chennai.

The pantsuit is this year’s hottest trend and is go-to ensemble for the actresses, off late. The divas are making everyone go gaga over the subtle styling. South actress Hansika Motwani is currently following the trend and was spotted in a blue pant for an event in Chennai. Every time when she steps out, Hansika’s impeccable style is truly unmissable. However, this time we are a little bit disappointed.

Hansika Motwani wore a sky blue pantsuit by Massimo Dutti. Firstly, the color of the outfit has totally disappointed us and upon, the ill-fitted jacket totally made it look all off. Even the dull sandals were totally a wrong pick for the outfit. It’s nay for us, what do you think? Let us know in the comments section below. 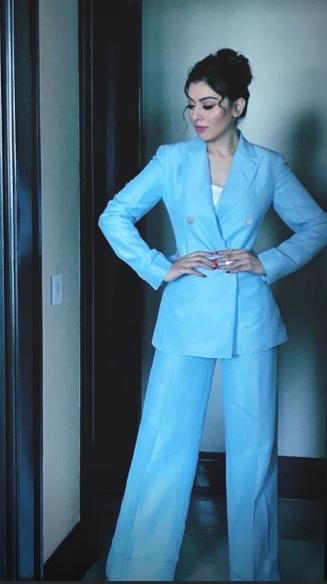 On the work front, Hansika has geared up for her next film, titled ‘Maha’. Talking about her 50th film, Hansika recently in an interview said, “I am really excited. Fifty films is a milestone in my career and I hope it turns out to be as big as the hype is (laughs) Maha is a female-centric film, and this is the first time I am doing something like this. It’s different from what I have been offered before and different from what I have chosen so far, and I am really looking forward to it.”