This pic of Vikram and his son is simply awesome

We really can't decide who is the smarter of the two.

A picture of Tamil superstar Vikram is going viral on the social media these days and that too for all the right reasons. In it, the superstar can be seen alongside his son Dhruv. Needless to say, the two look pretty suave in the pic and come across as perfect gentlemen. Now, we know why they say, like father like son.  In fact, we can’t really decide who is the smarter of the two.

Interestingly, earlier this year, Dhruv grabbed plenty of attention when he directed his maiden short film ‘Goodnight Charlie’ and released it on Youtube. Moreover, he also became the talk of the town when Vikram hinted that he was keen on joining the film industry in the near future.

For the uninitiated, in 1992, Vikram tied the knot with Shailaja and began a new phase in life. The two have been married since and have two kids—Dhruv and Akshita.

Here are some more pics of Vikram and his family. 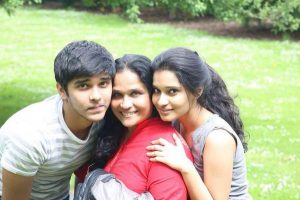 On a related note, the 48-year-old was last seen in ‘Iru Mugan’. Touted to be a sci-fi action thriller ‘Iru Mugan’  hit screens in 2016 and fared reasonably well at the ticket window. At present he has ‘Dhruva Natchithiram’ and ‘Sketch’ in his kitty. ‘Dhruva Natchithiram’ is being directed by Gautham Menon and is touted to be a spy thriller. On the other hand, ‘Sketch’ is being directed by Vijay Chander and also features Tamannaah in the lead. Besides these, he also has ‘Saamy 2’ in his kitty.

So, did you like these pics? Tell us in the space below.