Home » Tamil » Photos » Photos: Kamal Haasan and Rajinikanth come together to protest the Sterlite situation and the Cauvery issue

Photos: Kamal Haasan and Rajinikanth come together to protest the Sterlite situation and the Cauvery issue

: Kamal Haasan, Rajinikanth, and several other stars came together to protest against the Sterlite situation and the Cauvery dispute

Veteran actors Kamal Haasan and Rajinikanth were spotted today as they attended Kollywood’s protest against the Cauvery dispute and the Sterlite situation. And, not surprisingly, the stars made it clear that they would not leave any stone unturned to support that colleagues and criticise the sensitive issues. Speaking about the issues, Rajini said that he would let his actions speak louder than his words. He also made it know that Haasan is not his enemy and he would support him on important issues. The event serves as strong proof of the Tamil industry’s unity and may create a buzz in the political circles.

In case you did not know, Haasan and Rajini have announced their respective entries into politics and all trying to give proper shape to their parties. Previously, Haasan spoken about the Stelite issue and said that the opposition to it needs proper media attention.

“This anti -sterlite peoples agitation needs media support. My new status as a party leader need not be a disqualification or a deterent. I am still part of the Tamizh population. I am committed to this cause,” he had added.

He had criticised the Cauvery verdict/situation and asked the authorities to rectify it.

Similarly, Rajini had condemned the government for not taking proper action on the sterlite situation.

“One can’t understand why the government, which gave the nod for the plant, is not taking any action and is just watching,” he had added.

Similarly, he had criticised the Cauvery verdict and said that it would affect the well being of famers.

“The decision that has come in from the court regarding the Cauvery verdict will have an adverse effect on the farmers and those who depend on agriculture throughout our state Tamil Nadu. I hope the Tamil Nadu government applies for a revised verdict regarding this decision, for the betterment of our state. The government has to take steps immediately in order to get this revised verdict,” he had added.

Interestingly, today’s protest was also attended by the likes of Sivakarthikeyan ,Vijay, Dhanush and others. 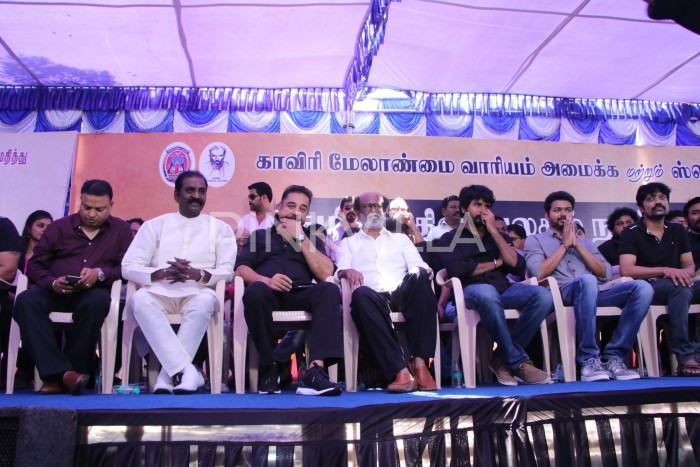