With Samantha and Chai’s wedding around the corner, we take a look at why they truly make a lovely couple.

Telugu cinema’s bubbly Samantha Ruth Prabhu will soon be tying the knot with her prince charming Naga Chaitanya, adding a new dimension to her life along the way. And, it goes without saying, this impending wedding has created quite a buzz amongst movie buffs. In fact, a few days ago, some pics of Sam in bridal wear went viral on the social media and made the wait the big day even more difficult. Today, let us take a look at why lovebirds Samantha and Chai make one beautiful couple.

Love at first sight: Samantha has been friends with Chai right from time she first met him on the sets of ‘Ye Maya Chesave’ which was the first film of her career. In some ways, this is a classic case of love at first sight. Talking about her friendship with the young star, Sam had recently said that she fell in love with him the second she laid eyes on him on the sets of their film.

Their adorable PDA: Sam and Chai have never really shied away from indulging in some adorable PDA. From hugging each other to making sweet remarks about their affair, the two have done it all and won hearts along the way. In fact, during their engagement ceremony, the two were seen hugging each other and proving that they truly are made for each other. Similarly, some time ago, Sam had said that in her mind she is already married to her ‘Manam’ co-star. 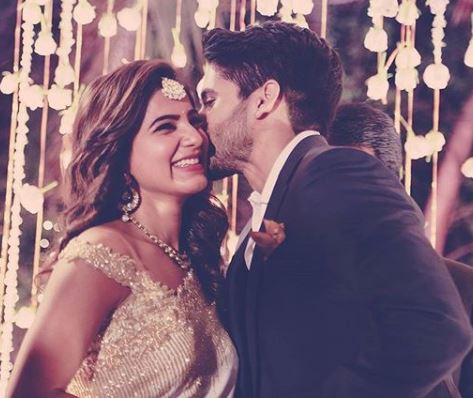 Sam knows how to bully Chai: Believe it or not, Naga Chaitanya agreed to tell his parents about his relationship with Sam only when the lady bullied him and put a funny condition before him. Recalling this, Chai had revealed that Sam threatened to tie a rakhi on his wrist if he did not discuss the relationship with his family. Now, that’s what we call an offer you just cannot refuse.

A power couple: Chai has starred in successful films like’Oka Laila Kosam’ and proved that he is a bankable name. Similarly, Sam too has been part of commercial blockbusters such as ‘Kaththi’ and ‘24’ to name a few. As such, the two truly complement each other and make a power couple.

So, are you looking forward to Samantha and Chai’s wedding? Tell us in the space below