Google shows Pawan Kalyan’s name as Kushal Babu, but why?

Pawan Kalyan's name has been changed to Kushal Babu as per some online resources. However, the actor has not commented about it.

Pawan Kalyan, who has ventured into politics is in the news for a rather strange reason today. The actor-turned politician is the head of the Janasena Party. However, when you search for him online, his name shows as Kushal Babu.

Well, Pawan’s actual name is Kalyan Babu, and therefore the name change, which has not been announced officially, has taken everyone by surprise.

Fans have taken to social media to question the star about this name change. One fan wrote, “Sir Google changed your name to Kushal Babu”. Another tweeted to Google saying, “You are hurting millions of Pawan Kalyan fans.”

Pawan has however not tweeted about it. His Twitter name also stands as Pawan Kalyan. The actor, who takes up social and humanitarian causes, was recently seen condemning the murder of journalist Gauri Lankesh.

On the work front, Pawan is busy with PSPK25 (Power Star Pawan Kalyan 25). The movie is directed by Trivikram Srinivas and stars Pawan Kalyan as a software engineer. The team began shooting for the movie in Bangkok recently.

Some part of the film was also shot in Annapurna studio. The movie will also have schedules in Bulgaria and other parts of Europe towards the end of October. It is scheduled to release in January. 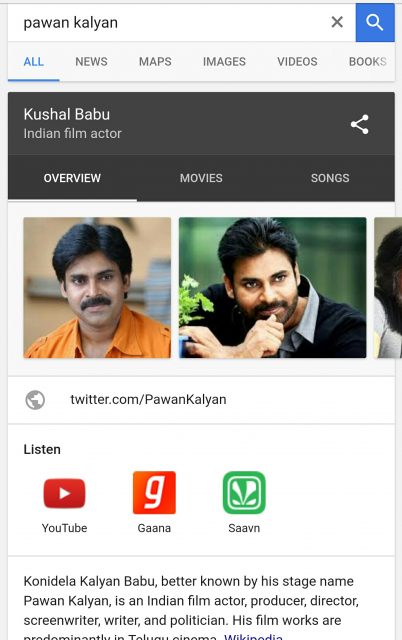