As soon as Amitabh Bachchan shared the motion poster, it took social media by storm. In fact, Baahubali star Rana Daggubati also could not stop himself from commenting.

The makers of upcoming Bollywood film Thugs of Hindostan released the first look of megastar Amitabh Bachchan as Khudabaksh. The epic action-adventure film is a talk of the town since a very long time and finally, the much awaited first logo and motions posters of the film were unveiled released. The motion poster featuring Big B sees megastar in a never seen before avatar. The actor can be seen in real thug avatar.

Big B shared the first motion poster and captioned, “Khudabaksh .. welcome ..” The dramatic background music set the right mood in the teaser. As soon as Amitabh Bachchan shared the motion poster, it took social media by storm. In fact, Baahubali star Rana Daggubati also could not stop himself from commenting. He took to his Instagram story to share Big B’s look from Thugs Of Hindostan and wrote, “one and only”. 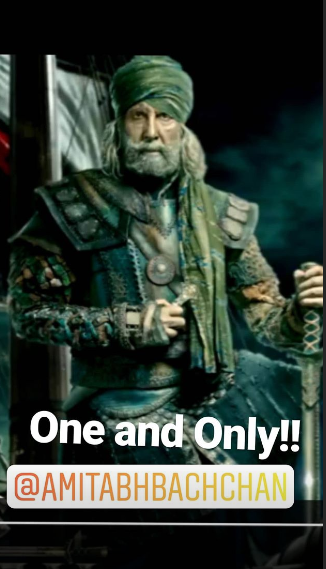 Thugs of Hindostan is based on Philip Meadows Taylor’s novel Confessions of a Thug and the cult of the Thuggee.

Talking about Rana Daggubati; the actor has geared up for his next NTR biopic. Rana will be seen playing the role of Andhra Pradesh chief minister Chandrababu Naidu in the NTR biopic. The film also stars Bollywood actress Vidya Balan. NTR biopic is being made in Telugu, Tamil and Hindi. Since NTR was a popular figure across India in films and political circles, the makers of the film are releasing into different languages for a wider reach.