Home » Telugu » News » Karan Johar on the sets of Brahmastra with Ranbir Kapoor and Nagarjuna’s son Akhil Akkineni; I pose they smile

Karan Johar on the sets of Brahmastra with Ranbir Kapoor and Nagarjuna’s son Akhil Akkineni; I pose they smile

But it is not only Nagarjuna who is in Bulgaria with team Brahmastra, Nagarjuna's son Akhil is also seen having a good time especially with Ranbir and Karan Johar.

By now we all know South star Nagarjuna is making a huge comeback to Bollywood after almost a decade. The actor, who was last seen in LOC Kargil (2003), will be a part of much-talked-about Bollywood film Brahmastra to be produced by Karan Johar. A couple of weeks ago, Karan Johar made an official announcement about the same by sharing a picture of Ranbir Kapoor with Nagarjuna and director Ayan Mukerji. The ace filmmaker posted an exclusive still from Bulgaria.

He wrote, “We are honoured and exceptionally excited to have the one and only @iamnagarjuna doing an extremely “special” role in our film #BRAHMASTRA !! Directed by Ayan Mukerji @SrBachchan @aliaa08 #RanbirKapoor …thank you sir for your love and your beautiful energy!”

NAGARJUNA joins the cast of #Brahmastra !!! Honoured and exceptionally excited to have him do a “special” role in the film!!!!

sunny Sunday and a fantastic lunch with the #brahmāstra team..we missed you!! @karanjohar

But it is not only Nagarjuna who is in Bulgaria with team Brahmastra, Nagarjuna’s son Akhil is also seen having a good time especially with Ranbir and Karan Johar. Karan shared an Instagram story of him posing with Ranbir and Akhil. Well, this picture is surely left us excited and wonder if Karan has any plans to launch Akhil in Bollywood. After all, it is a known fact that Dharma Productions helmed by Karan Johar is known to introduce new faces and talents to the industry. 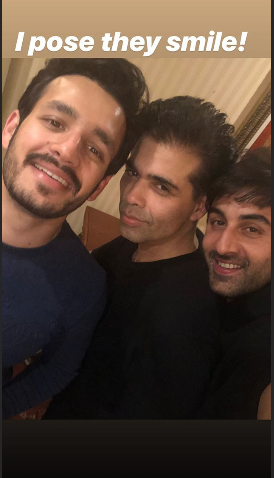 What do you think? Let us know in the comments section below.

Nagarjuna is presently doing a multi-starrer along with Nani under the direction of Bhale Manchi Roju fame Sriram Aditya.

Talking about Brahmastra, it is one of the much-talked-about upcoming trilogy that Bollywood has ever seen. Director Ayan Mukerji had been working on the project since last six years. “This film is a modern day film. It is set in India as it exists today but the name of the film is Brahmastra because the energy, wisdom and powers in the film come from ancient India. As far as costumes are concerned, there are some which may not be the way you would expect them to be,” Ayan had earlier said.