Harikrishna was immediately taken to the hospital where he was declared dead on arrival.

Telugu actor and Telugu Desam Party (TDP) leader Nandamuri Harikrishna died in a shocking road accident on Wednesday morning. The actor succumbed to serious head injuries in the accident near Telangana’s Nalgonda district. Harikrishna was immediately taken to the hospital where he was declared dead on arrival. This is tragic as this is second such incident in the Nandamuri family. Not long ago, Nandamuri Janakiram also passed away in a road accident. In December 2014, Harikrishna’s son Janakiram also died in an accident near Nalgonda. The accident spot is as near to where Harikrishna died.

The most saddening part is Nandamuri Harikrishna recently wrote a letter to his fans and asked them not to celebrate his birthday, which falls on September 2nd. Harikrishna requested his fans to donate money for the victims suffered in the Kerala flood relief instead of celebrating his birthday. Such unfortunate, he has left his fans in deep sorrow. 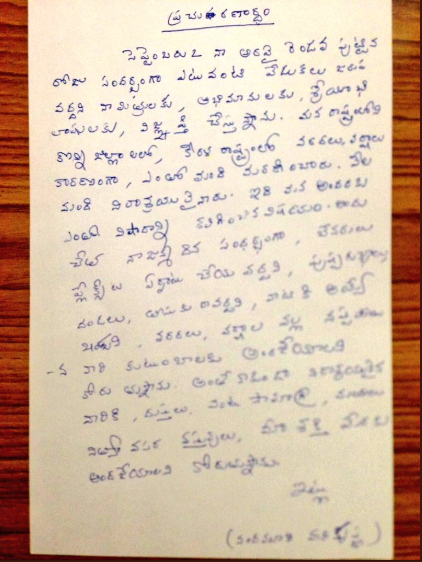 Harikrishna made his acting debut as a child artist in Sri Krishnavataram as little Krishna in 1964, directed by Kamalakara Kameshwara Rao. He then starred in Talla Pellamma (1970), which was followed by Tatamma Kala (1974), Ram Raheem (1974) and Daana Veera Shura Karna (1977). After a long gap, he returned to his acting career with a guest role in the Mohan Babu-starrer Sri Ramulayya (1998), followed by a full length role alongside Nagarjuna in Seetharama Raju (1999). His notable films are Laahiri Laahiri Laahirilo (2002) and Seetayya (2003), which are directed by YVS Chowdary; these films are biggest hits of his career.

He is survived by his wife, daughter Sushasini and sons Kalyan Ram and Nandamuri Taraka Rama Rao.