Prabhas took to Facebook to make a big announcement about his next project with Pooja Hegde.

Baahubali star Prabhas, who has geared up for the shooting of big-budget film Saaho, has finally announced his next project. The film starring Pooja Hegde in the female lead will be directed by Radha Krishna Kumar. According to reports, Gopi Krishna Movies along with UV Creations will produce this film jointly. The shooting of the film will take place in Europe. However, the makers are yet to make an announcement on the same.

Prabhas took to Facebook to make a big announcement about his next project. He wrote, “Hey guys, I am very excited to share with you the launch of my next trilingual film, directed by KK Radha Krishna and produced by Gopi Krishna movies in association with UV creations. The shoot for the same with Pooja Hegde will begin very soon.”

Meanwhile, Pooja Hegde and others have geared up for the official launch of the film. The untitled project is tentatively being called as, ‘Prabhas 2.0’. Said to be a period drama, fans are quite excited to know more about the film. The romantic entertainer will have some parts set in the 1940s. The makers of the film have geared up with the casting and more details about the same are expected to be revealed soon. Pooja Hegde took to the Instagram story to share her stunning look for the film’s announcement launch. Check out the picture below. 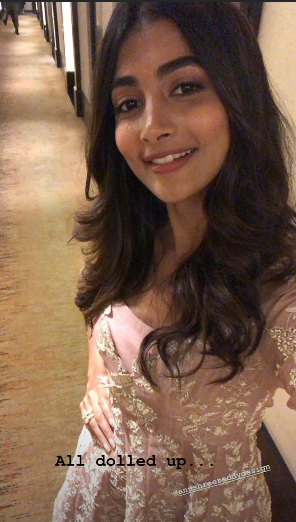 Meanwhile, Prabhas is currently busy with the shooting of Saaho. The film also stars Bollywood actress Shraddha Kapoor. Saaho also boasts of big Bollywood actors like Jackie Shroff, Neil Nitin Mukesh and Chunky Pandey among many other. The music of Saaho is being composed by Bollywood composer tri Shank-Ehasaan-Loy who have already said to have begun the compositions.