Samantha can be seen in a simple look in these stills from Rangasthalam.

The lovely Samantha Akkineni is beyond any doubt one of the most popular actresses in Telugu cinema today. And, she is going through an awesome phase in life right now. Nearly two months ago, the diva tied the knot with her sweetheart/actor Naga Chaitanya and began a new chapter in life. The two first tied the knot as per Hindu traditions in a grand ceremony. Thereafter, on October 7—the day after the Hindu wedding—these lovebirds got married as per Christian customs much to the delight of their well-wishers. To make matters better, Sam’s ‘Raju Gari Gadhi 2’ hit screens days after her marriage and did well at the box office. In it, she was seen alongside her Father-in-Law Nagarjuna and delivered an effective performance. Talking about the film’s success, she had called it a tribute to those who had suffered because of the Suchi leaks scandal.

“Amrutha’s character is a message to each and every person who opened the ‘Suchi Leaks’ videos, laughed at those videos and circulated them. Whenever Amrutha cries in the film, I did not need glycerine for I could understand the pain of the parents, families and well-wishers of the women in those videos. I played the role of Amrutha for all the women victimized in such a manner,” Sam had told TOI.

Post ‘Raju Gari Gadhi 2’, Samantha continued her tryst with commercial success when ‘Mersal became a runaway hit at the box office and earned good reviews along the way. In it, she was seen alongside Vijay and delivered a sincere performance. Talking about the film, the young lady had called praised director Atlee and called him an excellent storyteller.

“He has a great command over his craft, and it’s very endearing to see that kind of positivity and confidence. I believe that’s also a reason why someone as experienced as Vijay, who has worked with the biggest of names in the industry, came back to Atlee for a second time (after Theri) because there’s some magic in this man. I think he’s going to strike gold again in his own style. Mersal is like a complete showreel for Vijay,” she had told a website.

Now, Sam is in the limelight for an awesome reason. In An exciting development, some stills from her eagerly-awaited ‘Rangasthalam’ are creating a buzz on the social media for all the right reasons. In them, she can be seen in a rustic avatar that she carries off well. Her innocent expressions gel quite well in with her look and up its recall value in a big way. Now, that’s how you make an impact! 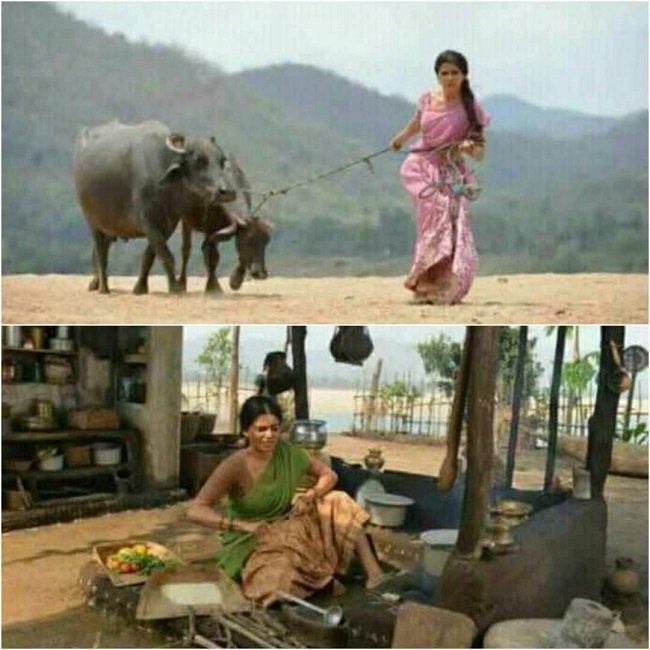 Interestingly, Ram Charan Charan can be see alongside Sam here and his rustic gels quite well with her simple avatar. We are sure the two will make a lovely pair on the big screen. In case you did not know, ‘Rangasyhalam is a romantic-drama and has been directed by Sukumar. If all goesa as planned, it will hit screens in March 2018.

Sometime ago, a leading daily had vreported trhat Chiranjeevi is happy about the way ‘Rangasthalam’ has come out and feels that it could be a classic.

“Recently, Chiranjeevi along with Rajamouli and others saw the rushes of the film and were surprised to see that the film has come out beautifully, almost like a classic. He is satisfied with the way the film has shaped up,” the source had added.

On a related note, this is a busy time for Sam. Besides ‘Rangasthalam’, she has ‘Mahanati’ and a film with Sivakarthikeyan in the bag. ‘Mahanati’ is based on the life of yesteryear actress Savitri and has been directed by Nag Ashwin. Recently, the producer had revealed that Sam’s character will be in an important part of the film.

“There is not much I can reveal yet, but Sam is the driver behind the wheels when it comes to the film,” she had added.

As far as Ram Charan is concerned, he is currenly producing the eagerly-awaited ‘Sye Raa Narasimha Reddy’. A Surender Reddy directorial, it is a period drama and has Chiranjeevi in the lead.