Home » Telugu » News » Rana Daggubati shares his experience of being on Karan Johar’s Koffee with Karan 6 with Prabhas, SS Rajamouli

Rana Daggubati shares his experience of being on Karan Johar’s Koffee with Karan 6 with Prabhas, SS Rajamouli

Karan Johar is all set to bring Baahubali team Prabhas, Rana Daggubati and director SS Rajamouli on his chat show Koffee with Karan season 6. Fans are quite obsessed with Prabhas and Rana Daggubati and it is going to be a huge treat for the fans to see this huge much awaited reunion. Karan Johar took to social media and wrote, “My proudest cup of KOFFEE!!! With team BAHUBALI!!!”. The actor shared an inside photo of him posing with Prabha, Rana and Rajamouli. The few inside pictures from the shoot are already doing rounds and it is only piquing excitement among the fans to know what’s in the store.

This is for the first time that the Telugu stars will grace the show and we are quite curious to know if Karan Johar will be able to tap into Prabhas’s personal life and Rana Daggubati’s marriage rumours that have been going since a long time. We are sure going to get some amazing things to know about Baahubali team. What do you think? Meanwhile, Rana is quite happy and also shared his experience. He commented on Karan Johar’s photo, “Thank you for having us, was really fun.” 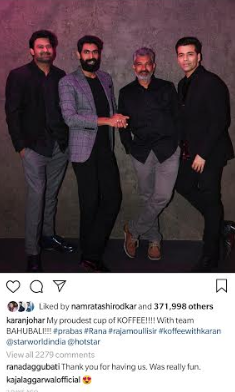 This is one episode of the season that we really can’t wait for!

Thank you for having us!! @karanjohar

How excited are you? Let us know in the comments section below.