Samantha recently cooked a tasty meal for her hubby dearest and made fans aww.

Even though a month has passed since Samantha Akkineni and Naga Chaitanya tied the knot and added a new dimension to their relationship, the mania surrounding T-town’s ‘It couple’ just refuses to go away. As it so happens, Sam recently cooked a tasty meal for her hubby dearest and made fans aww. Judging by the pics—which were shared on Insta stories—Chai had tasty dinner indeed and bond with his wifey all over again.  Now, isn’t that sweet! 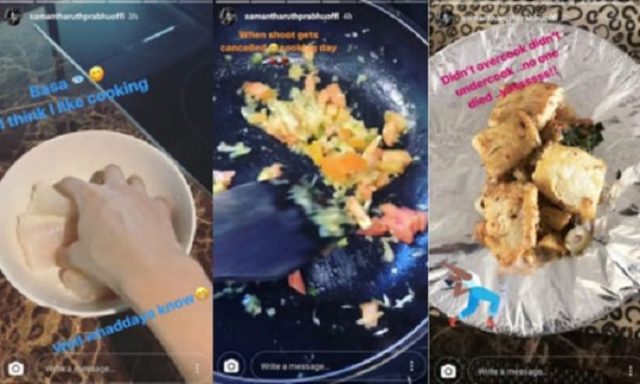 In case you did not know, Sam and Chai’s wedding was held on October 6 and proved to be an extravaganza. On the memorable occasion, the two tied the knot as per Hindu traditions and became husband-wife. This was followed by a Christian wedding which seemed to be straight out of a movie.

Interestingly, Chay-Sam’s love story began on the sets of ‘Ye Maya Chesave’. Prior to the wedding, the ‘Raju Gari Gadhi 2’ actress had said that he had fallen in love with his prince charming the very second she first saw him.

On the work front, Samantha currently has ‘Rangasthalam’ and a film with Sivakarthikeyan in her kitty. As far as Naga Chaitanya is concerned, he will next be seen in ‘Savyasachi’.

So, did you like Sam’s gesture for Chai? Talk to us in the space below.