After wrapping the shoot for Batti Gul Meter Chalu and launching the trailer of Stree, Shraddha has taken off to Hyderabad for the next schedule of Saaho.

After magnum opus, Baahubali 2: The Conclusion, Prabhas has geared up for another big budget film, Saaho. The film also stars Bollywood actress Shraddha Kapoor in an important role. Shraddha Kapoor has been omnipresent these days, courtesy her versatile line up of films. After wrapping the shoot for Batti Gul Meter Chalu and launching the trailer of Stree, Shraddha has taken off to Hyderabad for the next schedule of Saaho.

The actress took to her Instagram story to share an image from the sets of Saaho, writing ‘Back on set. Saaho is Shraddha’s first trilingual outing, the actress will be seen opposite Baahubali star Prabhas. The film is touted as an ultra-modern action flick, that will showcase Shraddha perform an action. 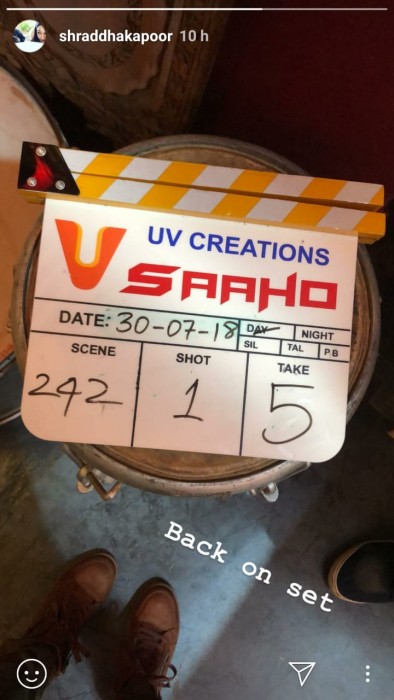 Shraddha Kapoor has been running a hectic schedule with an array of films lined up, leaving the actress juggle between pre-production and post-production of her projects. The actress has also been oscillating between contrasting films, while Batti Gul Meter Chalu is a ‘social comedy’, Stree is a ‘Horror comedy’, whereas Saaho is an ‘action film’.

Directed by young filmmaker Sujeeth, Saaho is being made on a lavish budget and has Prabhas playing a spy in the plot. Saaho will feature Bollywood actress Shraddha Kapoor as the leading lady and will mark her debut in Telugu cinema. Saaho also boasts of big Bollywood actors like Jackie Shroff, Neil Nitin Mukesh and Chunky Pandey among many other. Malayalam actor-filmmaker Lal too would be seen playing a key role in Saaho.

The music of Saaho is being composed by Bollywood composer tri Shank-Ehasaan-Loy who have already said to have begun the compositions. Saaho will be the trio’s second film in Telugu after having previously worked on Koncham Istham Koncham Kashtam starring Siddharth and Tamannaah in lead roles.