The 25-year-old ‘Saakshyam’ actor recently shared another picture of him from the shooting location that sees him sitting on an elephant.

Sreenivas Bellamkonda will be seen sharing the screen space with Kajal Aggarwal in Teja’s upcoming romantic entertainer. The shooting of the film is proceeding at a brisk pace and the makers are currently in Thailand for the film’s shoot. Sreenivas is quite active on social media and has been sharing pictures of him with the cast and crew from the film’s shooting location. The 25-year-old ‘Saakshyam’ actor recently shared another picture of him from the shooting location that sees him sitting on an elephant. However, the photo has not gone well among his fans and have been slamming the actor of animal abuse.

Sreenivas Bellamkonda captioned the picture as, “Shooting in #thailand with nature’s great masterpiece,an #elephant.” The actor is being slammed heavily for sitting on elephant’s tusks. Some of the other comments include, “Soo bad..u can’t do that ..it’s disgusting to see ppl behaving so..veryy bad..”

Another fan comments, “Mchhhh its really hurts that elephant plss stop it and don’t do like that…..it’s just disgusting.” 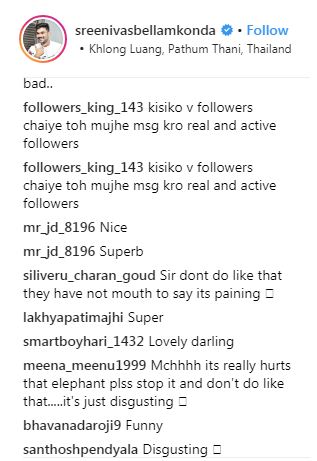 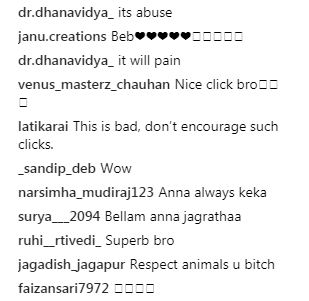 A post shared by Sreenivas bellamkonda (@sreenivasbellamkonda) on Sep 23, 2018 at 9:56pm PDT

When we are enthusiastic about what we do ,we feel this positive energy @kajalaggarwalofficial 🤗 #actorslife#onset#fun

A post shared by Sreenivas bellamkonda (@sreenivasbellamkonda) on Sep 19, 2018 at 5:47am PDT