The trailer of Allu Arjun's DJ has crossed a mammoth number on digital platform.

It’s only been less than 24 hours that the trailer of Allu Arjun’s Duvvada Jagannadham trailer is released and it is already setting some unmatchable records. The trailer has crossed a whopping 7.4 million views on digital platform which is the highest for a film in south India after Baahubali 2.

Fans of the Stylish Star Allu Arjun are in awe of the trailer and have made this trailer such a huge success. Directed by Harish Shankar, Duvvada Jagannadham has Allu Arjun don the role of a traditional brahmin which will be the first time for the actor. The trailer has Allu Arjun showcase his style and mass action sequences to which has his fans in awe of him. Allu Arjun, as a brahmin, looks absolutely convincing in the film and seamlessly pulls off the role. 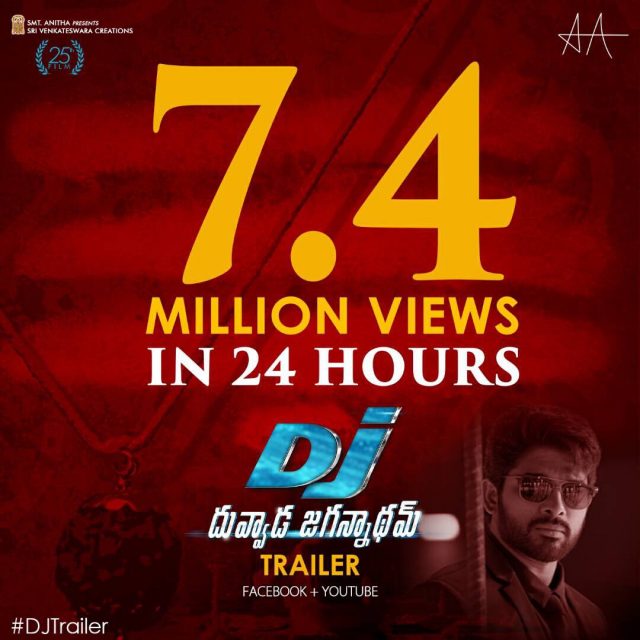 After receiving such a huge and positive response, the producers intend to announce the date of the grand audio launch soon. Duvvada Jagannadham is slated to be released on June 23rd, 2017.

Besides Allu Arjun, Duvada Jagannadham also features Rao Ramesh as the antagonist in the film. Pooja Hegde looks glamorous in her role in Duvvada Jagannadham and has some catching up to do to match the dance moves of Stylish Star Allu Arjun.

Duvvada Jagannadham is being produced by Dil Raju and Sirish under their home banner Sri Venkateshwara Creations. The music of the film is composed by Rockstar Devi Sri Prasad. Touted to an action drama, trailer ogf Duvvada Jagannadham has raised the expectations around the film and keeps the fans raving about the film.