Trivikram Srinivas is currently directing Pawan Kalyan’s film, which is being referred to as PSPK 25, and is aimed to be released in January 2018.

Jr NTR’s last release ‘Jai Lava Kusa’ was a blockbuster hit and his success streak continues at the box office. The ‘Young Tiger’, as he is fondly called by his admirers, will next collaborate with noted filmmaker Trivikram Srinivas and the film is said to be a romantic entertainer with comedy touch in it. The yet to be titled film was officially launched yesterday in Hyderabad and the event was graced by Power Star Pawan Kalyan and also clapped for the first shot. Much to the joy of fans of both the stars, the actors are seen in a frame together for the first time.

Trivikram Srinivas is currently directing Pawan Kalyan’s film, which is being referred to as PSPK 25, and is aimed to be released in January 2018. Jr NTR will be collaborating for the first time with Trivikram Srinivas and the expectations on the film are quite high since the combination of NTR’s acting with Trivikram Srinivas’ humour touch will be the most watched out for. The music for the film will be composed by Anirudh Ravichander who is also composing music for Trivikram’s film with Pawan Kalyan. The unit of PSPK 25 just wrapped up a schedule in Karnataka which is said to be the introduction of the Power Star. The unit will now head to Europe for a month-long schedule which will have the shooting of a song as well.

Here are few photos from the launch of Jr NTR’s film with Trivikram Srinivas: 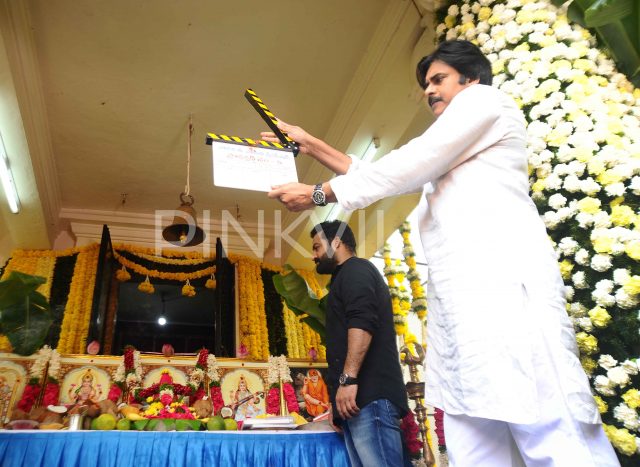