Photos: Sunny Leone launches the title and logo of her first Telugu film

Sunny Leone's first Telugu film is titled ‘Veeramaha Devi’ and will be a period-drama.

The lovely Sunny Leone is undoubtedly quite a popular name in the Indian film industry. In just a few years, she has carved a niche for herself thanks to her stylish personality, good looks, rocking style game and sizzling onscreen avatars. Moreover, she has won several hearts courtesy, her simple and shy nature. Now, there is some awesome news for her fans. In an exciting development, the lovely lady recently launched the title/ logo of her first Telugu film ‘Veeramaha Devi’ and added a new dimension to her career. ‘Veeramaha Devi’ is touted to be a historical-drama and will feature Sunny in the titular role. In it, she will be seen riding a horse as well as indulging in some sword fighting. The film will be directed by V C Vadivudaiyan and will highlight the cultures prevalent in South India. Sunny has given a call sheet of 150 days and will be working with a trainer from Andhra Pradesh in order to prepare for her role. If things go as per plan, ‘Veeramaha Devi’ will release in four languages—Tamil, Telugu, Malayalam and Hindi.’ 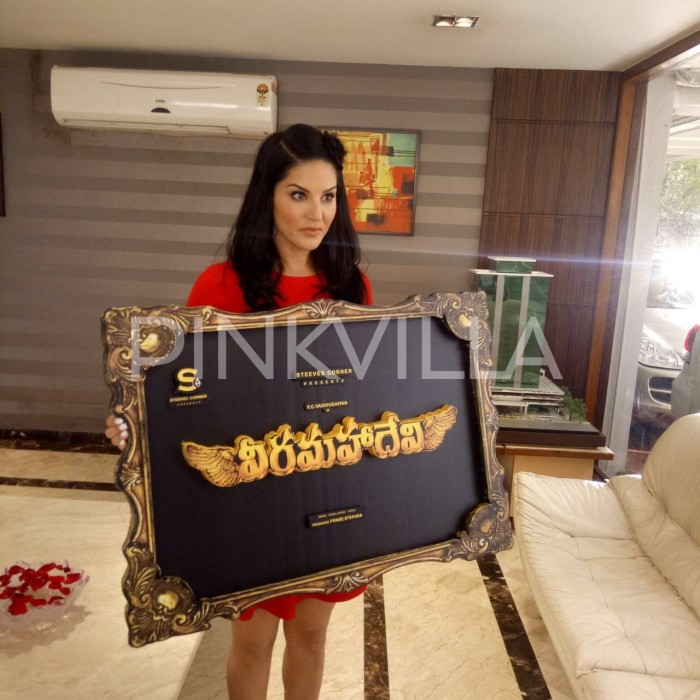 Sometime ago, Sunny had said that this film can go a long way in changing her onscreen image.

“After this movie I am sure my image will change completely. I have always liked doing action sequences. I was waiting for a script like this only for years. I started preparing for this movie from the minute director V C Vadivudayan narrated me the script. I have a special love towards south India so I am very happy to do a straight Telugu movie. I have a lot of my fans in South India, especially Andra Pradesh, Tamil Nadu and Kerala,” she had added.

Interestingly, while this is the first time that she is doing a full-length role in Tollywood, she has is no stranger to the Telugu film industry. Last month, she was seen grooving to a special number in the surprise hit ‘PSV Garuda Vega’ and set the screen on fire. Titled ‘Deo Deo’, it was composed by Vishnu Deva and saw B-town’s ‘Baby Doll’ shake a leg with Dr Rajasekhar.

“The song connects at the grassroots level and has a potential to become a chartbuster. The hook line ‘Deo Deo’ will catch on like a wildfire,” she had said about the song.

In 2014, she made a special appearance in ‘Current Theega’ and appeared in a Telugu film for the first time.  A romantic-comedy, it was directed by GN Reddy and featured Manchu Manoj-Rakul Preet in the lead.

She has also made special appearances in Kannada films like ‘DK’ and expanded her fan base even further.

On a related note, Sunny was slated to perform at an upcoming New Year ’s Eve event in Bengaluru and turn up the heat. However, she was forced to back out when the cops said that would not be able to ensure her safety. Talking about this, she had said that she will not be attending the event and also addressed those who were objecting to those who were against her being a part of the celebrations.

“Since the police of Bengaluru have publicly said that they will not be able to ensure mine, and all who attend, safety for my New Years event, my team and I feel, safety of the people should always come first. Therefore, I cannot attend. God bless and I wish everyone a safe and Happy New Year. Have your own voice and make your own choices. You are the youth and you are the new India! Stand proud and stand together. I love you all dearly!” she had tweeted.

So, are you excited about ‘Veeramaha Devi’? Comments, please!